Universal Orlando will be making a major announcement on Aug. 1, and speculation is running rampant that it’s related to a new “Fantastic Worlds” theme park.

At 10 a.m. Thursday, Aug. 1, Universal Orlando will hold a press conference at the Orange County Convention Center that will “reveal major news about the Universal Orlando Resort.” While our reporters here at the Villas at Regal Palms blog haven’t confirmed what the subject of the announcement will be, the Convention Center is located near the large plot of land that Universal acquired in recent years. Construction of infrastructure on the property is already underway, and leaks from a presentation earlier this year indicate it will become home to a brand new theme park.

Rumors point to Universal’s new theme park being called “Fantastic Worlds,” and it seems it will most likely be the home for Super Nintendo World, which has been officially confirmed as coming to Orlando. Super Nintendo World, as depicted in recently leaked photographs of an early concept model, is expected to include rides themed to Mario Kart, Donkey Kong, and Yoshi.

Further fan speculation points to other lands at Universal Orlando’s next theme park potentially being inspired by the Wizarding World’s Fantastic Beasts films; DreamWorks Animated franchises such as How To Train Your Dragon; and the Classic Universal Monsters like Dracula and Frankenstein. In addition to a theme park, the expansion land might also become home to one or more hotels, along with entertainment and dining options aimed at convention-goers.

The idea for a new park has been floating around since Comcast purchased the 475 acres a few years ago, and there is something happening there. With footage of dump trucks going in and out, a new park seems all but inevitable. The new park is rumored to have a 2023-2024 opening date, giving you yet another great reason to visit the Villas at Regal Palms.

Located in nearby Davenport, Fla., just minutes from all the exciting theme parks, the Villas at Regal Palms offers spacious townhouse accommodations that are perfect for the entire family. Book a stay today! 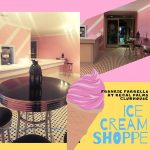