Depending on your timing, a visit to the Villas at Regal Palms in 2019 just may coincide with three new attractions at Universal Orlando Resort!

Set within the original Harry Potter universe (and not the expanded Fantastic Beasts world) this new attraction that will bring guests flying on Hagrid’s motorbike beyond the grounds of Hogwarts castle on a roller coaster ride, where they’ll see “some of the Wizarding World’s rarest magical creatures.”

Universal has previously confirmed that the theater that formerly housed the Terminator 2:3D attraction will not remain empty, saying that “an all-new live action experience based on a high-energy Universal franchise” that’s set to open in 2019. However, considering we’re almost a quarter of the way into 2019 and so far there have been no announcements about what the future occupant of this space will be, we’re starting to wonder if this project has stalled.

The lone update about this project comes from the Orlando Business Journal, who reported last year that permits were filed for a Project 126 (rumored to be the new show coming to this theater) that seemed to indicate that some construction work was happening inside this facility.

While a lot of the future of Universal Orlando Resort is still shrouded in secrecy, we do know one thing for sure: the next few years will be quite exciting for theme park fans in Orlando. With ambitious projects in the works at both Universal and Disney parks, there has never been a better time to be a theme park fan. Or to plan a visit to the Villas at Regal Palms! 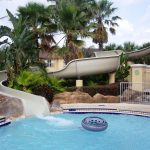 Things to do in 2019: Visit the Villas at Regal Palms!

Set sail on a SeaWorld Taste Adventure on your next visit to Villas!