Looking to visit the Villas at Regal Palms for less? Frontier Airlines’ latest addition to its Orlando service now will make it the airport’s top provider of nonstop services. 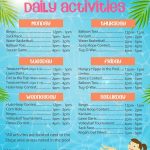 There’s lots to do at Regal Palms over Labor Day Weekeknd!